How AWS helps our Customers to go Global – Report from Korea Amazon Web Services Korea LLC (AWS Korea) opened an office in Seoul, South Korea in 2012. This office has educated and supported many customers from startups to large enterprises. Owing to high customer demand, we launched our Asia Pacific (Seoul) Region with 2 Availability Zones and two edge locations in January 2016. This Region has given AWS customers in Korea low-latency access to our suite of AWS infrastructure services. 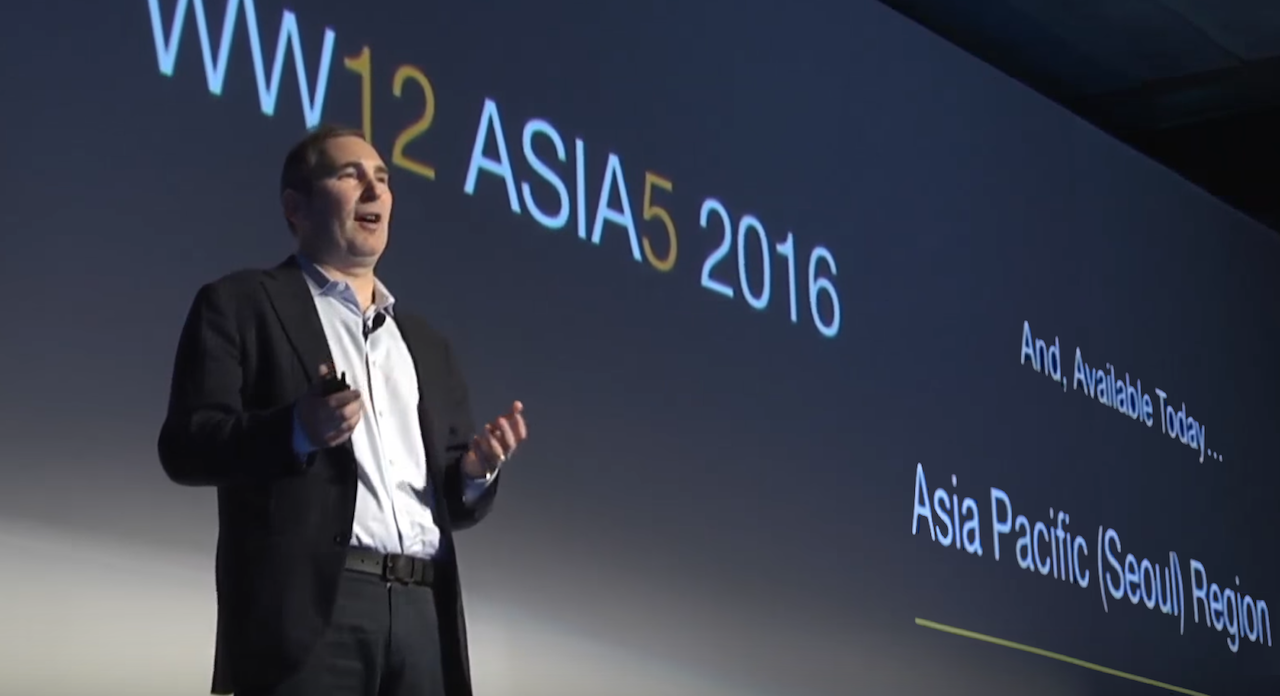 Following this launch, Amazon CloudFront announced two new Edge locations and one Edge cache: the third in May 2016, and the fourth in Feb 2018. CloudFront’s expansion across Korea further improves the availability and performance of content delivery to users in the region.

Today I am happy to announce that AWS added a third Availability Zone (AZ) to the AWS Asia Pacific (Seoul) Region to support the high demand of our growing Korean customer base. This third AZ provides customers with additional flexibility to architect scalable, fault-tolerant, and highly available applications in AWS Asia Pacific (Seoul), and will support additional AWS services in Korea. This launch brings AWS’s global AZ total to 66 AZs within 21 geographic Regions around the world. AZs located in AWS Regions consist of one or more discrete data centers, each with redundant power, networking, and connectivity, and each housed in separate facilities.

Now AWS serves tens of thousands of active customers in Korea, ranging from startups and enterprises to educational institutions. One of the examples that reflects this demand is AWS Summit Seoul 2019, a part of our commitment to investing in education. More than 16,000 builders attended, a greater than tenfold increase from the 1,500 attendees of our first Summit in 2015. 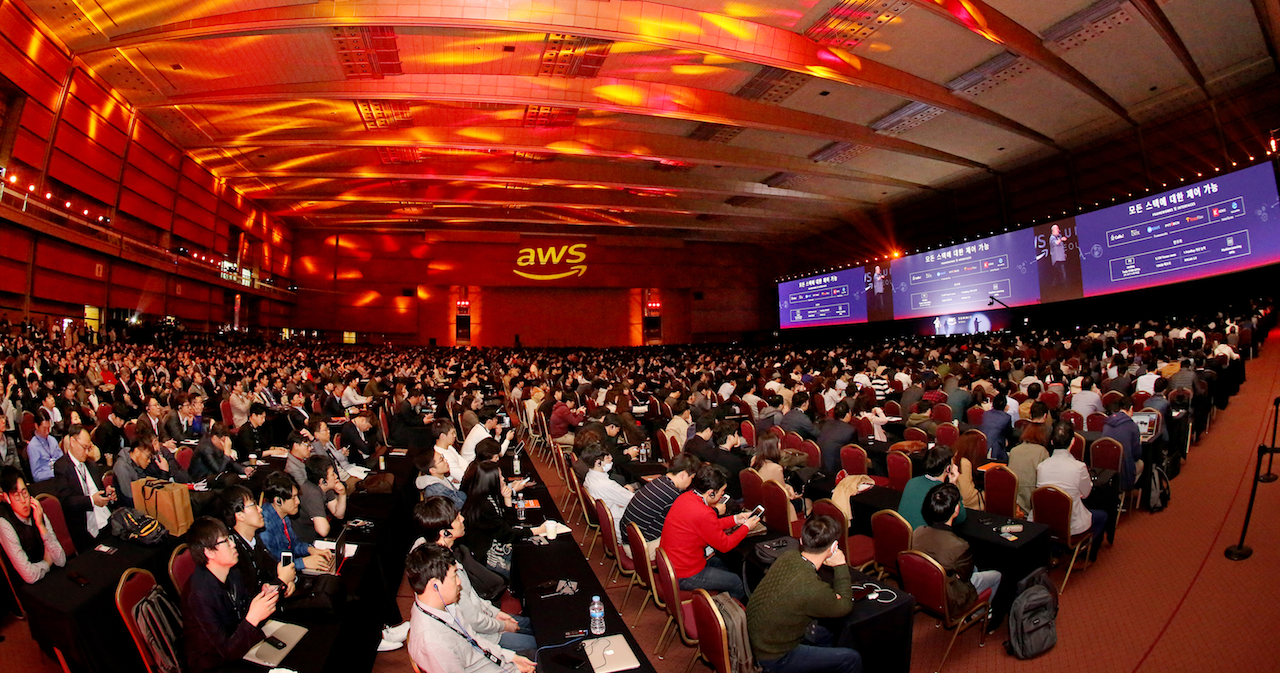 AWS Summit 2018 – a photo of keynote by Dr. Werner Vogels, CTO of Amazon.com

So, how have Korean customers migrated to the AWS Cloud and what has motivated them? They have learned that the AWS Cloud is the new normal in the IT industry and quick adoption to their business has allowed them to regain global competitiveness.

Let us look at some examples of how our customers are utilizing the benefit of the broad and deep AWS Cloud platform in the global market by replicating their services in Korea.

Do you know Korean Wave?
The Korean Wave represents the increase in global popularity of South Korean culture such as Korean Pop and Drama. The top three broadcasting companies in Korea (KBS, MBC, and SBS) use AWS. They co-invested to found Content Alliance Platform (CAP) that launched POOQ, which offers real-time OTT broadcasting to 600,000+ subscribers for TV programs including popular K-Dramas and has been able to reduce the buffer times on its streaming services by 20 percents. CAP also used AWS’s video processing and delivery services to stream Korea’s largest sports event, the PyeongChang 2018 Olympic Winter Games.

SM Entertainment, a South Korean entertainment company to lead K-Pop influences with NCT 127, EXO, Super Junior, and Girls’ Generation. The company uses AWS to deliver its websites and mobile applications. By using AWS, the company was able to scale to support more than 3 million new users of EXO-L mobile app in three weeks. The company also developed its mobile karaoke app, Everysing, on AWS, saving more than 50 percent in development costs. The scalability, flexibility, and pay-as-you-go pricing of AWS encouraged them to develop more mobile apps.

Global Enterprises on the Cloud
Korean Enterprises rapidly adopted AWS cloud to offer scalable global scale services as well as focus on their own business needs.

Samsung Electronics uses the breadth of AWS services to save infrastructure costs and achieve rapid deployments, which provides high availability to customers and allows them to scale their services globally to support Galaxy customers worldwide. For example, Samsung Electronics increased reliability and reduced costs by 40 percent within a year after migrating its 860TB Samsung Cloud database to AWS. Samsung chose Amazon DynamoDB for its stability, scalability, and low latency to maintain the database used by 300 million Galaxy smartphone users worldwide.

LG Electronics has selected AWS to run its mission-critical services for more than 35 million LG Smart TVs across the globe to handle the dramatic instant traffic peaks that come with broadcasting live sports events such as the World Cup and Olympic Games. Also, it built a new home appliance IoT platform called ThinQ. LG Electronics uses a serverless architecture and secure provisioning on AWS to reduce the development costs for this platform by 80 percent through increased efficiency in managing its developer and maintenance resources.

Recently Korean Air decided to move its entire infrastructure to AWS over the next three years – including its website, loyalty program, flight operations, and other mission-critical operations — and will shut down its data centers after this migration. “This will enable us to bring new services to market faster and more efficiently, so that customer satisfaction continues to increase.” said Kenny Chang, CIO of Korean Air.

AWS Customers in Korea – From Startups to Enterprises in each industries

AI/ML on Traditional Manufacturers
AWS is helping Korean manufacturing companies realize the benefits of digitalization and regain global competitiveness by leveraging over collective experience gained from working with customers and partners around the world.

Play Amazing Games
AWS has transformed the nature of Korean gaming companies, allowing them to autonomously launch and expand their businesses globally without help from local publishers. As a result, the top 15 gaming companies in Korea are currently using AWS, including Nexon, NC Soft, Krafton, Netmarble, and KaKao Games.

Krafton is the developer of the hit video game Player Unknown’s Battle Grounds (PUBG), which was developed on AWS in less than 18 months. The game uses AWS Lambda, Amazon SQS, and AWS CodeDeploy for its core backend service, Amazon DynamoDB as its primary game database, and Amazon Redshift as its data analytics platform. PUBG broke records upon release, with more than 3 million concurrent players connected to the game.

Startups to go Global
Lots of hot startups in Korea are using AWS to grow the local market, but here are great examples to go global although they are based on Korea.

SendBird provides chat APIs and messaging SDK in more than 10 thousand apps globally processing about 700 million messages per month. It uses AWS global regions to provide a top-class customer experience by keeping low latency under 100 ms everywhere in the world. Amazon ElastiCache is currently used to handle large volumes of chat data, and all the data are stored in the encrypted Amazon Aurora for integrity and reliability. Server log data are analyzed and processed using the Amazon Kinesis Data Firehose as well as Amazon Athena.

Hyundai Card, a top Korean credit card company and a financial subsidiary of the Hyundai Kia Motor Group, built a dev/test platform called Playground on AWS to prototype new software and services by the development team. The customer uses Amazon EMR, AWS Glue, and Amazon Kinesis for cost and architecture optimization. It allowed quick testing of new projects without waiting for resource allocation from on-premises infrastructure, reducing the development period by 3-4 months

Security and Compliance
At AWS, the security, privacy, and protection of customer data always come first, which AWS provides local needs as well as global security and compliances. Our most recent example of this commitment is that AWS became the first global cloud service provider to achieve the Korea-Information Security Management System certification (K-ISMS) in December 2017. With this certification, enterprises and organizations across Korea are able to meet its compliance requirements more effectively and accelerate business transformation by using best-in-class technology delivered from the highly secure and reliable AWS Cloud. AWS also completed its first annual surveillance audit for the K-ISMS certification in 2018.

In April 2019, AWS achieved the Multi-Tier Cloud Security Standard (MTCS) Level-3 certification for Seoul region. AWS is also the first cloud service provider in Korea to do so. With the MTCS, FSI customers in Korea can accelerate cloud adoption by no longer having to validate 109 controls, as required in the relevant regulations (Financial Security Institute’s Guideline on Use of Cloud Computing Services in Financial Industry and the Regulation on Supervision on Electronic Financial Transactions (RSEFT). AWS also published a workbook for Korean FSI customer, covering those and 32 additional controls from the RSEFT.

What to support and enable Korean customers
AWS Korea has made significant investments in education and training in Korea. Tens of thousands of people including IT professionals, developers, and students have been trained in AWS cloud skills over the last two years. AWS Korea also supports community-driven activities to enhance the developer ecosystem of cloud computing in Korea. To date, the AWS Korean User Group has tens of thousands of members, who hold hundreds of meetups across Korea annually.

AWS Educate program is expected to accelerate Korean students’ capabilities in cloud computing skills, helping them acquire cloud expertise that is becoming increasingly relevant for their future employment. Tens of universities including Sogang University, Yonsei University, and Seoul National University have joined this program with thousands of students participating in AWS-related classes and non-profit e-learning programs such as Like a Lion, a non-profit organization that teaches coding to students.

AWS is building a vibrant cloud ecosystem with hundreds of partners ― Systems Integrator (SI) partners include LG CNS, Samsung SDS, Youngwoo Digital, Saltware, NDS, and many others. Among them, Megazone, GS Neotek, and Bespin Global are AWS Premier Consulting Partners. Independent Software Vendor (ISV) partners include AhnLab, Hancom, SK Infosec, SendBird, and IGAWorks. They help our customers to enable AWS services in their workloads to migrate from on-premise or launch new services.

Finally, I want to introduce lots of customer’s feedback in our whiteboard of AWS Summit 2019 although they were written in Korean. Here is one voice from them ― “It made me decide to become an AWS customer voluntary to climb on the shoulders of the giant to see the world.” We always will hear customer’s voices and build the broadest and deepest cloud platform for them to leverage ours and be successful in both Korea and global market.

This article was translated into Korean(한국어) in AWS Korea Blog.